The church of Saint Teresa of Avila 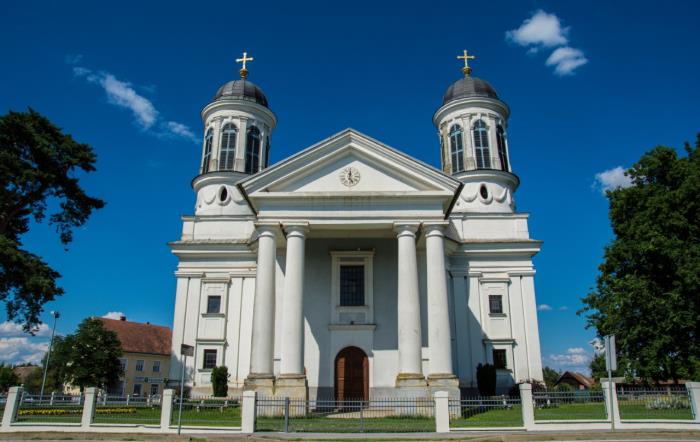 The parish church of Saint Teresa of Avila was built in the center of the town. The construction commenced in 1807 on the orders of Count Janković, and the dedication was made in 1821 by the bishop of Zagreb, Maksimilijan Vrhovec.

The church is a prominent example of architecture from the era of classicism in Croatia. It is registered in the Registry of Cultural Monuments. The church is the central structure of the ground plan. The sanctuary, the porch and the chapel are rectangular. The nave is circular and domed. Alongside the nave, there are two flank bell towers. Below the western bell tower is the cave and altar of Our Lady of Lourdes, and below the second bell tower is a sacristy. On the main altar there is a picture of Saint Teresa of Avila, made in 1814 by J.C. Scheöfft from Budapest. Six wooden candlesticks on the main altar are a rare type of classically designed candlesticks in Croatia. The flank walls of the sanctuary are decorated by the paintings of Our Lady of Sorrows and the Holy Trinity. Between the nave and the sanctuary, there is a sacramental fence between which contains the baptistery. The nave of the church also includes the altars of the Saint Florian and of the Sacred Heart of Jesus, which was brought from the chapel of Count Janković in the park.

The pulpit is made of wood in the shape of a cave with the image of Saint Peter. A large part of the nave is surrounded by a choir that rests on eight pillars. On the choir rests an organ with 13 registers. The central part of the choir served as a place for prayer (oratory) of the Janković family. It contains the crest of Janković Counts. Below the chapel of Our Lady of Lourdes there is a crypt with the sarcophagi of the church builder, the Count Ivan Nepomuk Janković of Pribert, his wife Tereza, and their son. The entrance into the crypt is from the outside of the church.

The village of Suhopolje (Terezovac) was built in the mid-18th century. century. The manor house was erected in 1750. At the site of the church, in 1757, a small wooden chapel of Saint Martin was erected, with a cemetery alongside. That year, Suhopolje had 13 houses.

Saint Teresa of Avila, a virgin and a church teacher, was born in Avila, Spain, in 1515. She freely and consciously entered the monastery, and was very fond of knowledge. All the time she was reading new books. She was a thoughtful, determined and serious nun. After experiencing illness and healing by the intercession of Saint Joseph, she worshiped him even more and spread the devotion to him. She decided to reform the Carmel. The reform consisted of experiencing the spirit of the Scripture, it was performed slowly, but it transformed the religious life. The new Carmel of Discalced Carmelites was born. Through foundation of new monasteries, as the greatest fruit of this rich period, various written works were recorded. She is one of the most famous persons of the Catholic renewal in the 16th century. She has been influencing the spiritual life of Europe for four centuries with her originality and ingenuity. She died in 1582 and was canonized in 1622. The Pope Paul VI proclaimed her a Church teacher in 1970.